10 not so random questions with: Jared McGovern (Urban Pioneers) 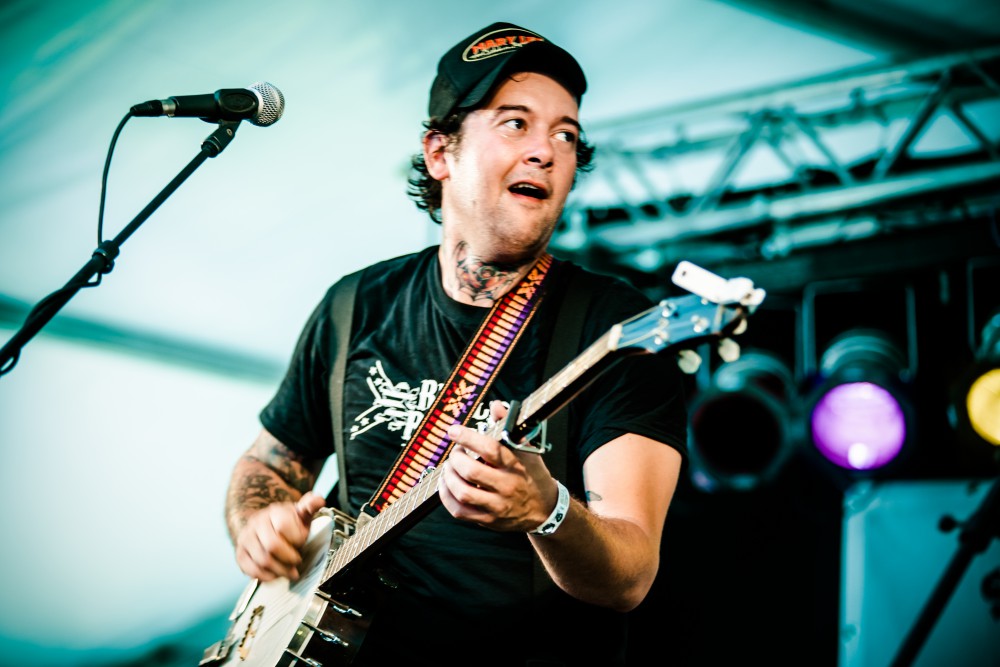 Here at Old Style Music Nights HQ we had the idea to ask ten of the same questions to a bunch of different people who we respect for what they do in this world. Being it musicians, label owners, festival bookers, whatever. Over the weeks you’ll see them come all by… Remember, they all got the same questions, this could get weird…
We start this series with Jared McGovern, singer and banjo player for The Urban Pioneers. For our readers in Europe, good news, they will be touring here from November 14 to December 21. That last show is a show I’m doing, so if you are somewhere around Diest (Belgium) that date, come and dance with us at The Celt! Find all tour dates and info via the link at the end of this interview.

1. Introduce yourself to our readers please.
My name is Jared McGovern, I play banjo and sing in the Urban Pioneers.  I wear size 11 shoes and need a haircut pretty bad. I’m engaged to Liz, who plays fiddle and sings in the Urban Pioneers.  We live together in a bus parked on our bass player’s (Guido) property in East Tennessee.

2. On what record would you have loved to play? (any style, artist, whatever)
I’m greedy. One time I found a magic lamp and a genie gave me three wishes. My first wish was to ask for unlimited wishes.
I wish I could have played on Michael Jackson’s Thriller. First because it is fucking awesome and second because it’s the highest grossing song of all time and I’d be rich as hell and be able to do a lot of good with that money.

3. What is the first concert that made a real impression on you and made you want to play music?
The first concert I ever went to was Lollapalooza in 1994 and that show warped my fragile mind forever.  The line up was insane – Metallica, Rancid, Ramones, Rage Against The Machine, The Melvins, and a bunch of other bands.I still remember that day like it was yesterday, it made such an impression on me. I remember the weather being beautiful and riding with my friend in his mom’s car listening to Jimi Hendrix and bouncing off the walls with anticipation. I had seen concert footage before but I had never experienced anything like it. I was mostly excited for Rancid, the Ramones, and Metallica and I lost my mind when they played. As soon as they started I went straight for the pit and my buddy shoved me down and I got the shit stomped out of me.It was awesome!! That day changed me forever.  After that day I became a serious music lover and tried to go to as many shows as possible.

4. Is there a musician/artist you really want to work with and why?
That is a really tough one. I want to work with lots of artists. I love collaborations and letting yourself go to be influenced by other writers and musicians. I am very new at this song writing thing so recently I’ve been trying to surround myself by song writers I admire to see if it will rub off on me. I’ve been talking to Brook Blanche a little bit about this song idea I have and I’m excited to see how that turns out. I was also talking in the past about putting together a truck driving album that will have an all-star cast of folks like James Hunnicutt, Wyatt Maxwell, and Adam Lee. All that stuff takes time though so hopefully we’ll actually make it happen.

5. How did you end up in this “roots” scene?
If you told me 20 years ago that I would be singing and playing banjo in a hillbilly band I would’ve slapped you. I went through lots of phases, haircuts, and bands in the past and it was all fun as hell. The position I am in now came from a long line of sometimes great and sometimes horrible decisions. Life is a journey and everything you do today will affect where you are and who you are tomorrow. I started playing music as a horrible guitar player in punk bands. I wanted to play music but I was such a bad guitar player that I knew I needed to try to play something else to be able to join a band because no one would want me as a guitar player. I really really sucked. I don’t know why but for some reason I thought I’d be able to play fiddle. I got a cheap fiddle off eBay and tried to play it for a couple of weeks until I gave up. That shit is hard! Then I had some interest in playing upright bass. I didn’t have money for one though so I built a wash tub bass and that thing was awesome. I was hooked!
Mind you at this time I had just moved to a new town and didn’t have any friends or have a clue where to go see shows. I didn’t know any fellow musicians or anything so I was pretty much left on my own to figure stuff out.
After playing the wash tub bass for a little while I went and splurged and got myself a used Engelhardt bass from a music shop. I loved that thing so much, I played until my fingers bled and then I taped them up and played some more. After a few months of figuring out the bass I had the confidence to play with some people so I started searching around for other musicians. I played with anybody and everybody I could. I was having a good time but none of the bands seemed to stick or have the same idea that I had in mind until I started Soul Reapin 3. I had a ton of fun with that band. We were a psychobilly band based out of Connecticut and Dennis, from Sawyer Family played guitar and sang too.
I finally got to the point where I wanted to give this music thing a full-time shot. Our drummer had a great teaching job that he didn’t want to give up so I left SR3 in pursuit of another band where I can play music full-time. I did a month with The Hillbilly Hellcats in Europe and when I got back I got a phone call that Bob Wayne was looking for a bass player. I packed my stuff immediately and met the band in Austin, TX to join the tour.

6. Do you believe in aliens, and if so… What does their music sounds like?
I totally believe in aliens!! I don’t think they have music like we have music. I bet aliens don’t have the ability to hear like we do, they have other weird senses and stuff that we can’t even imagine. If humans heard alien music it would make us poop our pants and our head would explode

8. Just like any “scene” this one will explode in time, how do you see the future of this new “roots” movement?
Roots music has always been around and will always be around in some shape or form. There has been sort of an explosion as of lately but this is really nothing new. I hope that there will always be people who are preserving the traditional styles of music but I also hope there will always be people who will take that traditional style and put their own contemporary spin. Commercial music that is forced to us is mass-produced crap much like every other industry now a days. It takes a little more effort to seek out the good wholesome real products but the pay off from it and what you get out of it is so worth it

9. What band or record do you really like, but you are a little a shamed about?
I like a lot of off the wall stuff but I’m generally not ashamed of it. Sinead O’Connor? Bring it on. Rick Astley? Hell yeah. Hootie? I used to be able to get down until he started playing that country crap. When it comes down to it, if it makes you wanna shake your but then shake the hell out of it. One thing I hated about the punk scene is that people would give you a hard time over what you listen to. Fuck you! I listen to what I want!

10. Eating dog shit or record with Toby Keith?
How much is he paying?

Posted on November 5, 2014 by oldstylemusic

← Lara Hope and The Ark-Tones: Luck Maker
10 not so random question with: Lou Shields →